We’d just thrown all the sacks of beans up onto the railroad car when Foreman came by to say, “take them off now boys, we’re fixing to roll out,” so we took them off.  The dust from those sacks of beans was much worse if you were on the ground catching them (as I was) rather than up on the flat car throwing them down.  But soon enough we got the sacks down and stacked pretty good on the ground next to the tracks, coughing bean dust as we went. That’s when Foreman came up and told us “get those sacks on the car boys, what are you waiting for?” He was right.  So we on the ground handed them up (I think the dust is worse if you’re up above slapping them in stacks on the car). Then the car was loaded and the rest of the boys hopped down onto the track behind or in front of the car. Foreman came by and said “hop up boys and throw them sacks down.” 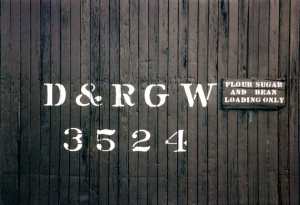 When the sun set that day I think we’d just finished. All along the empty track in front & behind was so peaceful with an orange shimmer reflecting the sky, and crickets humming and toads buzzing. We opened one bean sack and poured a pot of water full of them & started them soaking for breakfast.  We rolled our bedrolls out on the flat car and slept. We had an early morning loading those beans up.